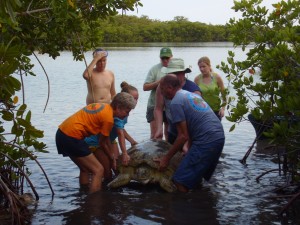 On June 11th the Berry family was out kayaking when they came across a sea turtle hanging out in the mangroves. As they approached, the turtle remained still and didn’t try to get away. When they got really close they saw a boat had struck him along his shell. Deanne & Erin Berry remained with the turtle in the seagrass beds of the mangroves while Conor & Tom Berry returned to shore to call The Turtle Hospital. The Berry family helped us load the turtle into our ambulance; they named him Franklin. Franklin is a male green sea turtle weighing 220 pounds and has cracks in the top of his carapace from the impact of a boat hit. He is stable and under our care. We will have him examined by Dr. Mader next week to determine the extent of his wound, however he is very strong and the wound seems a few weeks old. We are confident he will get stronger and heal well. We hope to have him returned home relatively soon! 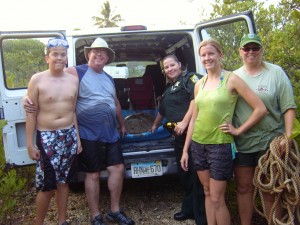