FWC Officer Knight called The Turtle Hospital’s emergency hotline October 5 after receiving a call from a boat captain that had found a sea turtle entangled on a lobster trap rope.  Tom Luebke met the captain at the nearest dock with the turtle ambulance and found a subadult loggerhead turtle with a dangling right rear flipper.  The flipper was almost cut off by the entanglement and necrotic. 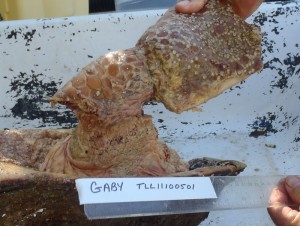 Once back at the hospital, an x-ray of Gaby’s head revealed there was a metal blade lodged in the roof of his beak. After removing the blade and providing wound care to his rear flipper, we notified Dr. Doug Mader that an amputation would be needed as soon as possible. 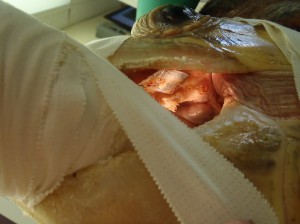 Gaby’s right rear flipper was removed the next morning, and he is recovering well. We will monitor the surgery site over the next few weeks, check back for an update soon! 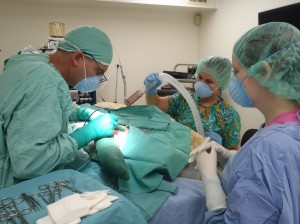