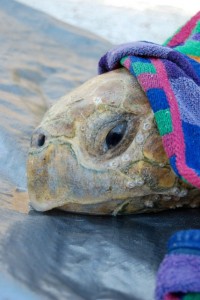 Henderson a 92-lb Loggerhead sea turtle was rescued near Big Coppitt Key.  He was found floating and was rescued by a Good Samaritan named William.   Once at the Turtle Hospital, staff gave him physical which included x-rays, weighing and measuring. Through x-rays staff found that Henderson was slightly impacted and will be given vegetable oil to help pass the impaction.  Besides being impacted Henderson is slightly emaciated and had a fresh wound to his carapace (shell).  The wound did not enter his body cavity and will most likely not need any special treatment.  Henderson will remain at the Turtle Hospital until he is no longer floating and puts on a few pounds.  Here’s to a quick recovery for Henderson! 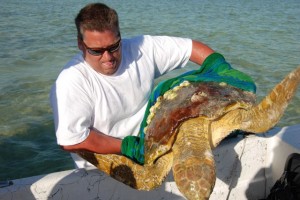 UPDATE: 4/24/11   Henderson has passed his impaction and no longer needs to be tube fed!  He is still feeling a little weak but is now able to eat about 20 squid per feeding all on his own!  Henderson’s recovery will still take some more time, but Turtle Hospital Staff has been giving him all the medicine, squid, love and care he needs!