Little green Hess has been through a lot–three blood transfusions, tube feeding and a lengthy car ride transfer from Sea World to The Turtle Hospital.  After one month here, and 5 months total in rehab, Hess was released on April 18.  FWC staff member Sue Schaft provided transport for the now-healthy sea turtle to the East Coast, where Hess originally stranded.  Our freckled friend sure was glad to get out of rehab and back into the sea!  Let’s hope we don’t see her again! 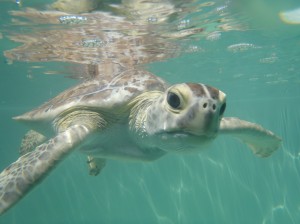