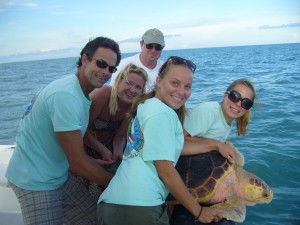 Hollarry, a loggerhead sea turtle who arrived at The Turtle Hospital in January, was released by boat on Thursday, July 21. Hollarry was rescued byTurtleHospitalstaff just off Vaca Cut Channel with numerous Fibropapilloma (FP) growths on her flippers and neck. This is a rare sight to see as the virus is normally found in green sea turtles. Although most FP turtles will remain here at The Hospital for one year, Hollarry recovered so wel that we knew her 6 month stay at had healed all wounds. Nicknamed the “Army Turtle” for her feisty and active ways, the staff released Hollary from founder Richie Moretti’s boat at sunset just off Vaca Cut. 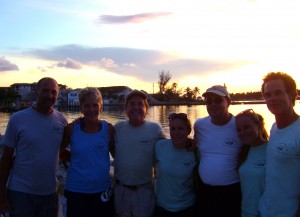