After just about a year of rehab, Izzy, a juvenile green sea turtle came full circle and went back to the ocean. Izzy was struck by a boat and brought to the hospital on August 11, 2011, with help from her rescuer named Judy.  The boat hit caused a large gash in her carapace, a fracture to the skull, and a broken left front flipper. 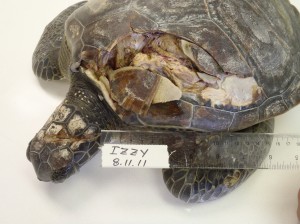 The rehabilitation team was unsure if Izzy would ever recover. Izzy quickly had surgery by Dr. Kristin Hall at the Marathon Veterinary Hospital in order to remove dead tissue and bone. The wounds were constantly cleaned and honey was applied in order to help heal them. Izzy slowly began to eat on her own, but staff wasn’t sure if Izzy would ever use her left front flipper again. To help Izzy, Dr. Gerry Diethelm stepped up to the plate using cold laser physical therapy to help reduce joint pain and to promote healthy tissue growth. For the first 8 months of Izzy’s rehab with us, she continuously floated at the surface of the water and could not dive down for food. Curious about possible damage to Izzy’s brain, she was brought to the Fisherman’s Hospital for an MRI. Izzy was also given some enrichment in her tank including several small fish in order to help stimulate her brain. After 8 months, Izzy began resting on the bottom of her tank and had a big appetite! The wound slowly healed and filled in with healthy scar tissue. Her broken flipper even healed naturally! 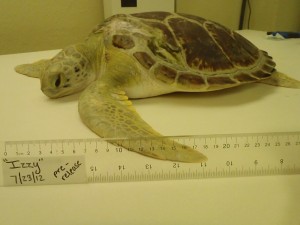 One year later, Izzy was brought by boat out to the Everglades on a calm day where we sent her on her way. The Everglades are federally protected, boat-free, and have plenty of sea grass for green sea turtles like Izzy to eat! Good luck Izzy! 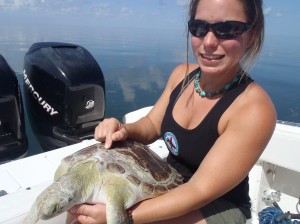