Home  » Past Patients Blog » Jersey the loggerhead from Florida!

Jersey the loggerhead from Florida! 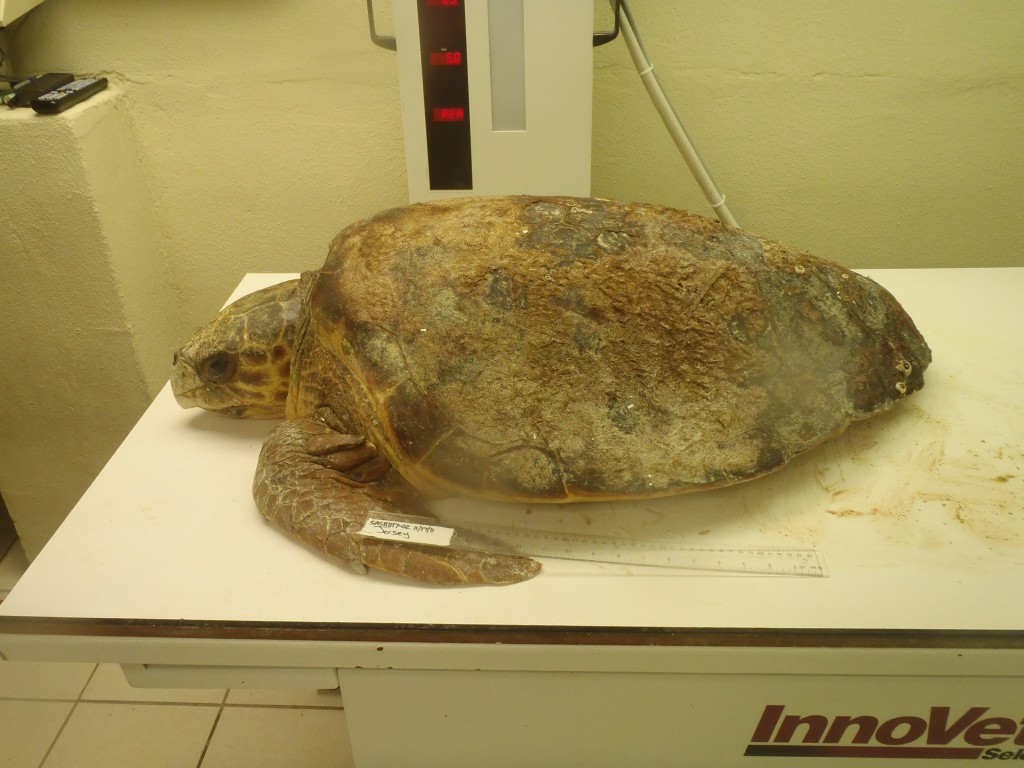 November 17th started out like any other day for John Kocinski and Ray Gabrish in Cudjoe Key. The sun was shining, and all was right in the world. Being avid fisherman, they decided it was a good day to check their personal lobster traps. They made it out to Sawyer Key, when they spotted something thrashing in the water. They decided to investigate and upon taking a closer look, realized it was a large loggerhead with its left rear flipper entangled in a commercial lobster trap line; still attached to the 70 pound trap! Without missing a beat, John and Ray called up the Turtle Hospital to file a report. They noted their GPS coordinates and headed back to shore. Meanwhile, Turtle Hospital team member Gunnar, and Sue Schaf of the Florida Fish and Wildlife Conservation Commission, jumped in the ambulance and made their way to Cudjoe Key. Once there, John and Ray got them in their boat the “Alley-oop” and made their way back to Sawyer Key. Arriving on the scene, they could see that this turtle’s rear flipper was in rough shape. The rope had already partially amputated the flipper, and it was pretty obvious that this poor turtle had been dragging this lobster trap around for a couple of weeks. They cut the rope, got her on board and headed back to Cudjoe. Once there, they got her in the back of the ambulance and headed back to the hospital to begin her rehabilitation process. Upon closer examination of her rear flipper, it was clear the remaining flipper had to be amputated. The Surgery was performed on Tuesday, November 22 and was a complete success! Aptly named “Jersey” after John and Ray’s home state, she is currently recovering in one of our hospital tanks and is expected to be out of here in no time! We need more people like John and Ray in this world. These gentlemen had a plan to fish and enjoy themselves, and dropped everything to save Jersey’s life. Without their compassion, who knows whether or not she would have even had a chance. They have been to the hospital since to check on Jersey’s recovery process, make a generous donation, and also to let us know they would love to provide assistance in the future if we ever need a boat. We completely rely on the public to find sea turtles in distress. We are very greatful to John and Ray, they definately saved Jersey’s life! Thank you guys for all of your hard work and your contribution to the Turtle Hospital. We greatly appreciate it! 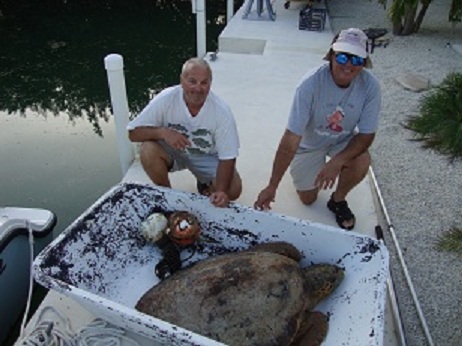