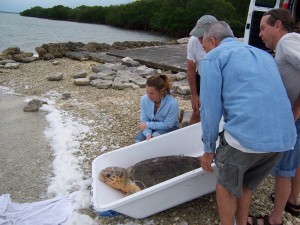 A very happy day finally arrived for the Turtle Hospital and a sub-adult loggerhead who had  almost a three month stay with us! This loggerhead named Jersey was entangled in a lobster trap line that cut off circulation to her left rear flipper. This entanglement was wrapped around the flipper long enough to require an amputation of that flipper. After surgery, antibiotics, and healing time; she was ready to go back to the wild. We were all happy to see her go but also miss her due to her photogenic nature. It seemed like she was always curious about the humans wandering around her tank. She would come up for breaths of air whenever a program was around to see what was going on. She was rescued on Cudjoe Key and we released her close to where she was found. Her rescuers John and Ray were very supportive of our efforts to rehabilitate her and even came to visit Jersey multiple times while she was in the hospital. During the release Ray was even able to join us and watch her go back to the wild. The release was very quick because as soon as Jersey was out of her tub she was gone. We would like to send thanks to John and Ray for all of their support. Without them who knows whether or not she would have made it.