An adult Loggerhead Sea Turtle was found by US Coast Guard personnel, floating in the Key West Coast Guard Station boat basin. Concerned, as the turtle was floating on the surface and being pushed into a corner by the wind, they contacted the Turtle Hospital. With a great deal of muscle provided by the Coast Guard, the 188 pound turtle was netted and lifted up a seawall and into the ambulance. 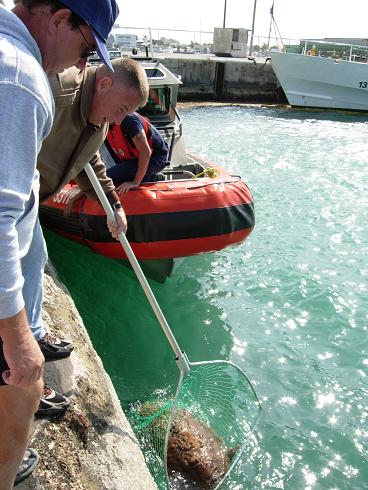 Koalani (Hawaiian for “Heavenly Warrior”) was very weak and emaciated. Staff administered Atropine and fluids prior to transporting to Marathon. No apparent problems showed up on the X-rays and blood work is in process to determine if infections or other problems can be identified. Due to the weakened state of the animal, it will be “dry docked”, being kept out of water, until regaining enough strength where it is able to lift it’s head above water to breath. 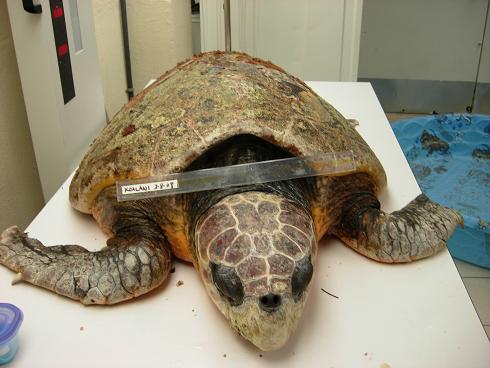 Koalani appears to have a body cavity infection. Additionally it has been determined that the jaws can only be opened about an inch which would indicate “lockjaw”. This has been seen as a secondary problem in some turtle with infections. Lockjaw requires daily physical therapy where the jaws are forced apart to regain the ability to open normally. 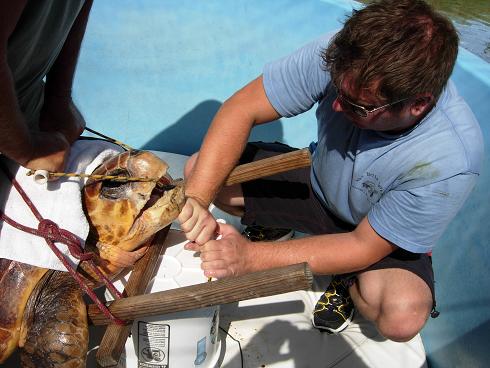 Koalani is unable to eat and is being “tube fed” where a hose is inserted into the stomach and nutritional fluids are administered daily. This has to be done on a stand so the turtle is at a 45 degrees angle to ensure the fluids are not aspirated. 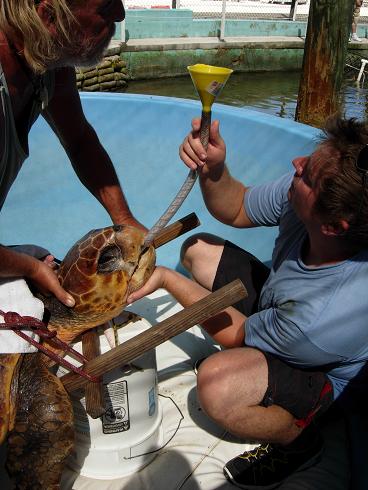 Koalani remains very sick. In addition to the infection and lock jaw we are dealing with pneumonia as well. Fluids are periodically removed from the lungs using a vacuum pump and the turtle is getting double doses of antibiotics administered daily.

Dr Doug Mader and Turtle Hospital staff used an endoscope to inspect Koaloni’s lungs. The lungs are clear of fluids so it would appear the treatment for pneumonia was successful. The turtle continues to be very weak and is receiving daily medications and being kept under a heat lamp at night. 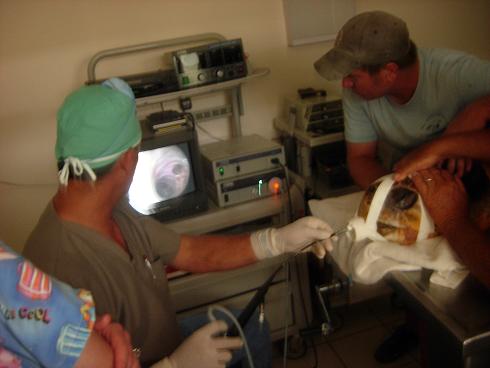 Koalani has been placed in shallow water and is able to raise it’s head to breath. This makes feeding much easier as squid can be placed down the throat and the turtle is able to swallow (being in water).

Koaloni continues to improve. The water level in the tank has been raised and the turtle is able to stay on the bottom (no longer floating!) and come for air. Daily physical therapy for lock jaw continues as does “placement feeding”. 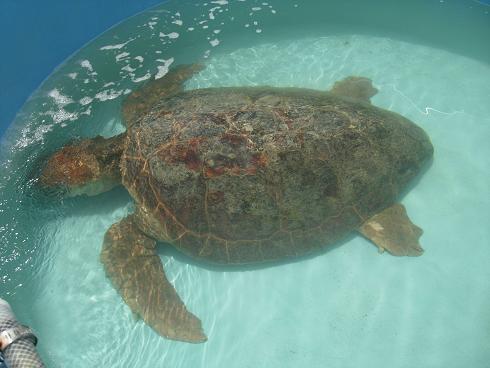 Koalani’s condition had recently deteriorated and despite staff’s best efforts, we were unable to save the animal. Necropsy reveled that a number of the organs had been damaged by disease.