A juvenile Green Sea Turtle was rescued aprox 7 miles North of Duck Key. The small turtle has numerous fibropapilloma tumors affecting all flippers and the eyes. Surgery will be performed to ensure no internal tumors are present (by endoscope) and external tumors will be removed by laser and radio scalpel. 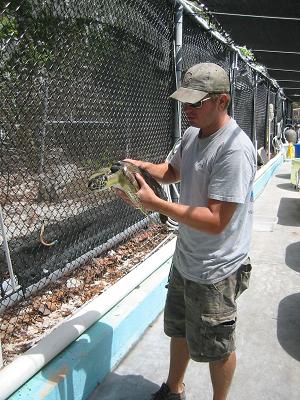 Endoscope inspection was performed and no internal tumors were found! Lisa is a bit undernourished so her surgery to remove external tumors will be delayed a couple of weeks to provide time to get stronger.

Lisa had surgery today to remove fibropapilloma tumors affecting both eyes. This was critical as the tumors can grow rapidly and if left unchecked, could damage the eyes where the turtle could be blinded and then be un-releasable.

Doctor Kristen Hall from Marathon Veterinarian Hospital donated time on her day off, to perform the delicate operation using a laser to remove the tumors from the eyes and several from the neck. Lisa will need at least one and possible two more surgeries to remove the remaining tumors. (Surgeries are limited to 1 hour or less when the turtle is under anesthesia).

Lisa continued to have Fibropapilloma regrowth’s. This is commonly an indication that the patient has internal tumors. Currently, there is no treatment for internal tumors. Fibropapilloma tumors are highly vascular and typically attack the vital organs including the heart, liver and kidneys. One last endoscope proved that Lisa was infected internally and she was humanely euthanized. We are deeply saddened by the loss of this very sweet turtle, but we are sure she lived a happy life while here with us at The Turtle Hospital.