The last two weeks have been very tough for sea turtles in the Keys. The Turtle Hospital in Marathon has admitted 19 turtles in this time period, in addition to several more reports of dead sea turtles in the area. The timing coincides with the extremely low temperatures that the Keys experienced recently. When these cold blooded animals are exposed to such extreme lows, the animals are more susceptible to illness and infection. When this occurs the turtles float at the surface, making them vulnerable to being struck by boats. This is the case with six of these live turtles admitted to the hospital recently and almost all of the reports of dead turtles. For the turtles that are not struck by boats, the turtle will slowly starve to death if they cannot overcome the infection. 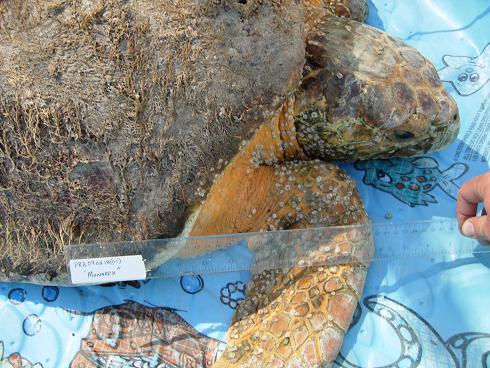 One of these turtles recently admitted was “Monarch”, a subadult Loggerhead sea turtle. Monarch was extremely weak and emaciated upon arrival but fortunate enough to be rescued before she was struck by a boat. X-rays showed air in the intestines which could be caused by an intestinal blockage. This 120 pound sea turtle was named after the “Monarchs’ Club”, a great little neighborhood pub in Grand Rapids, MI, where Turtle Hospital administrator Ryan Butts worked as a bartender for several years. “Monarch” is now going through rehabilitation at the hospital and is expected to make a full recovery.

Sadly, Monarch passed today. Despite giving Monarch the best treatment possible, she did not respond to treatment and became increasingly lethargic. Turtle Hospital staff will perform a necropsy to determine cause of death.