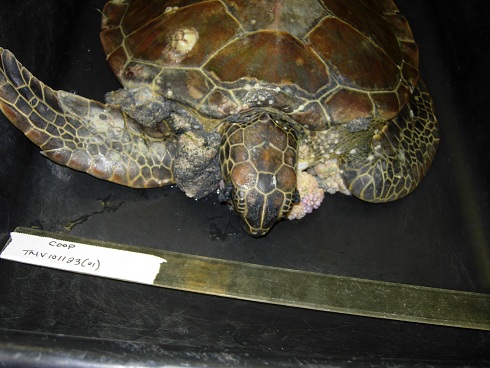 The Turtle Hospital has recently admitted three new green sea turtles with Fibropapilloma. Dawn, Pabst and Coop. Endoscope showed that none of these patients had internal growths and suprisingly, Dawn & Pabst were males! Each sea turtle has had one surgery to remove some of the external growths, however each of the three turtles will require additional surgeries to remove the remaining papillomas.

Thanks to Dr. Jackie Bruce (Marathon Veterinary Hospital) Dawn is now tumor free! His one year at the hospital begins and staff will keep a close eye on him hoping the tumors do not regrow.

Sadly Coop has passed. A necropsy was performed and Coop had a minor lung infection as well as extreme emaciation which most likely contributed to his passing.

Pabst is now tumor free thanks to Dr. Geri (Marathon Veterinary Hospital) and recovering from his final surgery!