Our newest loggerhead, Karsten, was found recently floating in a canal by homeowners.  He was not able to swim away quickly when approached, which raised suspicion.  The helpful locals called The Turtle Hospital, and we came to the rescue.  Karsten was very cooperative as we lifted him out of the canal using a net.  After we brought him back to the hospital and examined him, the x-rays showed that he had two hooks in his throat.  We did blood analysis and he does have an infection which may explain why he was floating.  He is having trouble eating, but the staff is doing their very best to help him.  Thank you again to the locals who helped us save Karsten.  Stay tuned for more updates! 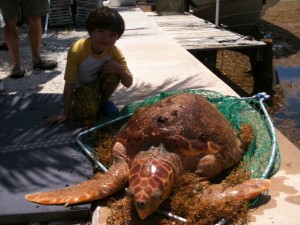 Karsten was named after this little boy who helped rescue him. Thanks Karsten!