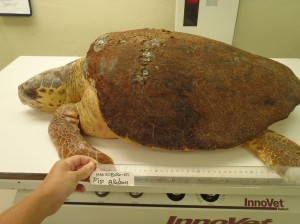 On August 8 2011, a sub-adult loggerhead named Pip, was found floating and unable to dive to get away in the Atlantic side of the ocean near Marathon. Boat Captain Howard Kelley spotted the turtle floating, contacted the Turtle Hospital to make the report, and then prompted fellow ship mate Zach Willis to make the rescue. Turtle Hospital rehabilitation staff, Marie Simpson and Gunnar Zollinger, arrived at Captain Pip’s Marina to transport the sea turtle back to the hospital. Pip was found early enough that he still has a good body weight. A floating sea turtle can sometimes happen when they have a blockage in the GI tract or from a body cavity infection. Pip’s x-ray did not reveal a blocked GI tract so it appears to be a body cavity infection. Body cavity infections happen when something passing through the GI tract punctures the intestinal wall allowing bacteria into the cavity and that bacteria then forms gas. Pip still has buoyancy issues here in his hospital tank and is receiving antibiotics as well as a cozy place to live while he heals.