Home  » Past Patients Blog » Puffer Fish Vs. Puffer the Loggerhead

Puffer Fish Vs. Puffer the Loggerhead 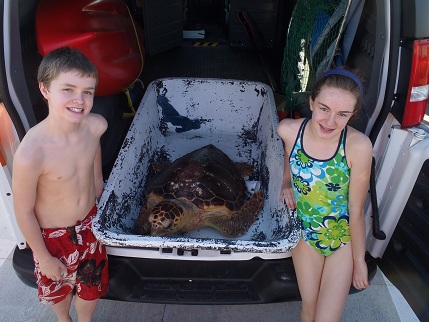 Emily and Ben Graue, and Christina Stong along with her 3 year old son Kevin, were on vacation in the keys recently and got the thrill of a lifetime! They were snorkling on the Jolly Roger dive boat when they noticed a loggerhed sea turtle thrashing and struggling on the surface of the ocean. They informed the crew of the boat Captain Doug Morgan and Captain Bonnie Clydesdale of Captain Hooks Marina and Dive Charters, and they immediately took action. Captain Bonnie jumped into the water and using a lifejacket was able to get the turtle back to the boat. Once on board, they realized the turtle had a puffer fish in his mouth. When puffer fish feel threatened they inflate their bodies to make themselves larger. This little loggerhead tried to eat this little fish and then it inflated to three times the orginal size and lodged itself in the turtles throat! 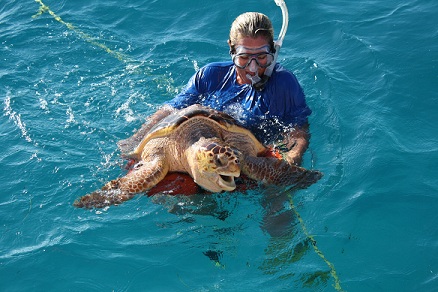 The crew of the boat was able to get the puffer fish out without causing serious harm to the turtle. Turtle Hospital team member Gunnar met the Jolly Roger and her crew at Tarpon Creek Marina to pick up “Puffer,” the loggerhead sea turtle, and transport him to the Turtle Hospital. Once back at the hospital Puffer was evaluated, and other than a few puncture wounds to the roof of his mouth and a swollen toungue, was perfectly healthy. We see all sorts of different problems associated with the sea turtles, but this is the first time in our 25 year history that we’ve seen a puffer fish lodged in a turtles throat. Puffer is cruising back and forth in one of our rehabilitation tanks anxiously awaiting release. We are just holding him for a few extra days to make sure he doesn’t develop an infection. Very special thanks to Ben and Emily Graue, Christina Strong and her son Kevin, as well as the crew of the Jolly Roger dive boat for saving Puffer’s life. He very easily could have died without their help. That puffer fish was over the turtle’s airway making breathing very difficult, and it would have been only a matter of time before Puffer drowned. 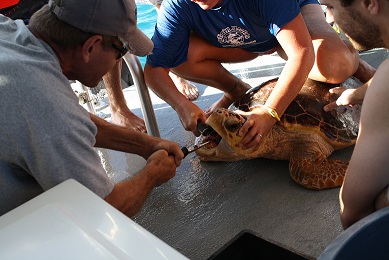