Rocky D is ready for release! 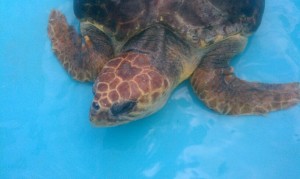 Our first patient of 2012 is ready to go home!   Come wish Rocky D, a loggerhead sea turtle well on Saturday, March 31st, 1:00 p.m. at Anne’s Beach, MM 73 in Islamorada as we release him back to his ocean home.  Rocky D was rescued on January 10th.  X-rays revealed his intestines appeared to be filled up with shell from small snails and crustaceans.  Loggerheads will sometimes go after alternate food sources when they can’t find the items in their natural diet. A normal loggerhead diet should consist of crab, lobster, clam, and conch.  After being impacted the turtles will begin to float on the surface of the ocean due to gas in their intestines, and they become very vulnerable. Rocky D was treated at the hospital with  lactulose, beano and glycerin enemas which will helped to move the impaction along quicker. Fluids helped to hydrate him and antibiotics helped to prevent infection.