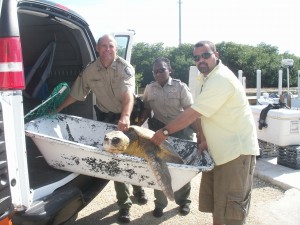 On January 10th our hospital received its first patient for the year. A phone call came through early afternoon about a report of a large, possibly 250 lb, floating sea turtle. Stacey Money was out kayaking in the Largo Sound when she saw the turtle floating and reported it to FWC who then made the rescue. Rehabilitation staff from The Turtle Hospital met up with FWC to retrieve the turtle in Key Largo. On board FWC’s  boat was a very tired sub-adult loggerhead. Our new patient received the name Rocky D after one of the FWC officer’s name. The crew from FWC who made the rescue was Racquel Daniels (Rocky D), Erik Steinmetz, and Rene Taboas. Once Rocky D was back at the hospital we were able to administer fluids, antibiotics and take  x-ray’s. We also got an accurate weight and Rocky D ended up weighing 156 lbs. The x-ray’s revealed an impaction of the intestines. The intestines appear to be filled up with shell from small snails and crustaceans. Loggerheads will sometimes go after alternate food sources when they can’t find the items in their natural diet. A normal loggerhead diet should consist of crab, lobster, clam, and conch. After being impacted the turtles will begin to float on the surface of the ocean due to gas in their intestines, and they become very vulnerable. Sometimes the turtles float for a very long time before they are rescued but luckily for Rocky D he was found early! To treat Rocky D we have started feeding lactulose, fiber, and beano. We are also performing glycerin enemas which will help to move the impaction along quicker. Fluids help to rehydrate him and antibiotics help prevent infection. Rocky D is quickly becoming a favorite here as he is very cooperative during care and very excited during meal time! 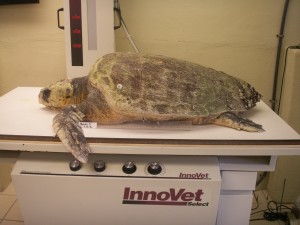