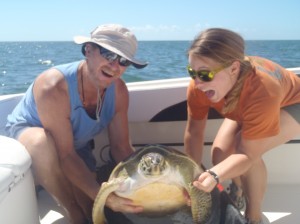 On March 1, The Turtle Hospital  released yet another rehabilitated sea turtle back into the wild. Rusty, a 43lb green sea turtle, arrived at the hospital in December 2009 after being rescued from a fishing line entanglement around his front right flipper. Rusty also had tumors on his eyes and along the neck and flippers. The tumors are caused by a virus called Fibropapillomatosis and affects 50% of the patients at the hospital. It took six surgeries to remove all of the tumors and then an additional year of care at the hospital to monitor for regrowth tumors that might form. Richie Moretti, the founder of The Turtle Hospital, along with Rehabilitation staff Jim Weidman and Marie Simpson, went 12 miles out into the Gulf of Mexico for Rusty’s release near a bed of seagrass. Good Luck Rusty!!