Home  » Past Patients Blog » Saddle Up!

Floating under Saddle Bunch #5 Historic Bridge, our newest turtle arrived in good spirits despite being emaciated.  This subadult loggerhead’s rescue required a team effort between FWC staff member Sue Schaft and Turtle Hospital rehabber Gunnar.  Using a kayak to traverse a series of deep water channels, the two successfully pulled the turtle to safety.  To increase glucose levels, Saddle received Dextrose once he was unloaded into our Emergency Room.  Saddle also received a freshwater bath which helped alleviate the attachment of a record amount of barnacles to the carapace.  All X-rays look good, so we hope that some TLC will speedily get this turtle’s blood chemistry to normal levels. 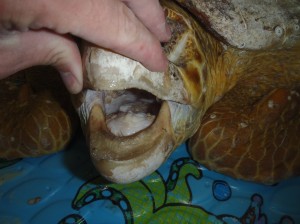 Saddle came in with such high epibiont coverage, barnacles were even inside the mouth!

We would like to thank both Monica Woll and Scott Parker for calling in the stranding, and thank you to the Overseas Heritage Trail rangers who kept an eye on the turtle until help arrived.  The Turtle Hospital rehab staff have taken quite a liking to Saddle’s antics which include attempts to bite any and everything nearby his mouth.