“Schripsy” is a critically endangered Hawksbill Sea Turtle that was recently rescued in Islamorada, Florida Keys. Fisherman discovered the small turtle floating and unable to dive, the first indication that something is wrong with a sea turtle. The turtle was found near Robbie’s Marina, an Islamorada landmark that has a large congregation of Tarpon waiting for a handout from the human visitors. To a young sea turtle, large fish (including tarpon) are a top predator. Fortunately for little Scripsy, concerned fisherman realized the little guy was in distress and brought him into the docks at Robbie’s, where staff from The Turtle Hospital rushed down to pick it up. The Hawksbill was weakened and emaciated, and is undergoing rehabilitation at The Turtle Hospital. 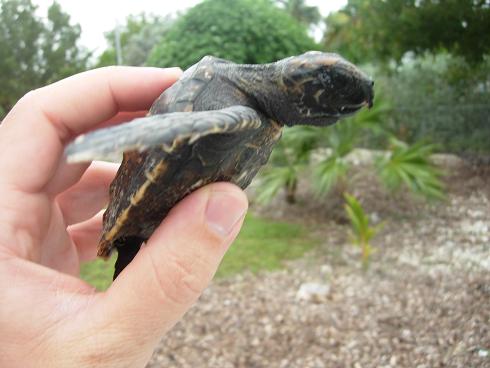