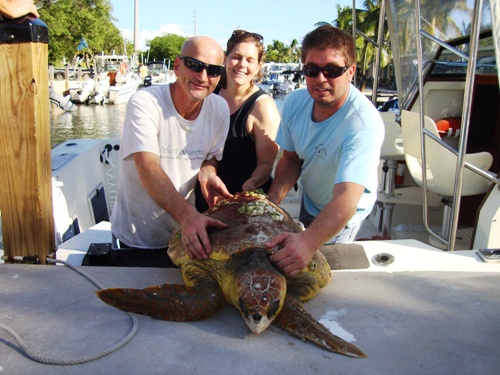 Doug and Sharon took a guided educational tour at The Turtle Hospital and loved it. Doug and Sharon also love living in the keys and taking their boat out to go fishing. It was a windy day in the keys when they were out on their boat and noticed a little Loggerhead in distress. If it wasn’t for what they learned during their visit at The Turtle Hospital they may not have known that this turtle was calling out for help! Sharon-Tilly, as she was later named by her rescuers, was unable to dive. She was stuck floating at the surface of the water struggling to swim in the strong winds and currents. Doug immediately called The Turtle Hospital for help. Turtle Hospital administer Ryan Butts and FWC biologist Sue Schaf met a couple of good Samaritans, boarded a boat from a local marina, and found Doug and Sharon patiently waiting with the little Loggerhead. 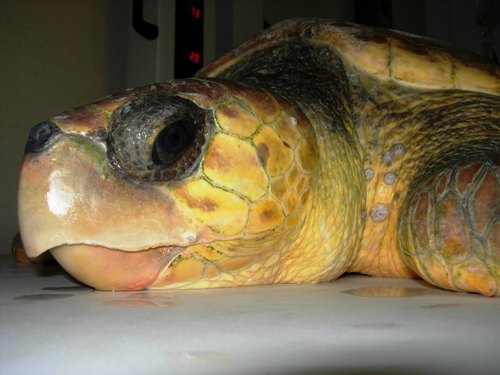 Back at The Turtle Hospital, x-rays revealed that Sharon-Tilly is most likely suffering from an impaction. The trapped gas in her intestines is causing her to float helplessly. Loggerhead sea turtles are carnivores living off crab, lobster and conch for a meal. Sadly, overfishing of these crustaceans and mollusks for human consumption is leaving these Loggerheads hungry and searching for anything for a meal. Often times ingesting small hermit crabs, snails and urchins that their bodies are unable to digest. Treatment for Sharon-Tilly is Vegetable Oil added to her squid breakfast to help her pass the impaction. We expect Sharon-Tilly to make a full recovery!

Sharon-Tilly continues to grow stronger everyday. Although she still floats from the impaction, she has begun slowly passing small pieces of crab and other undigested items. The Turtle Hospital would like to thank Doug and Sharon for not only rescuing this beautiful Loggerhead, but continuing to support her through her rehabilitation through donations. Thank you!