Recently, an injured Hawksbill Sea Turtle was found on a beach in Sandy Point National Wildlife Refuge (St Croix, US Virgin Islands) by turtle nest surveyors. The adult turtle had come on to the beach to lay eggs, when it was viciously attacked by feral dogs. Local agencies rescued “Sandy” and transported her to the Island Animal Clinic for treatment.

The US Fish and Wildlife Service in St Croix contacted the Turtle Hospital in Marathon, to determine if our facility could provide continuing treatment and long term rehabilitation. With agreement from the FWC and USFWS (permitting agencies), American Airlines graciously provided free transport from St Croix to Miami yesterday. 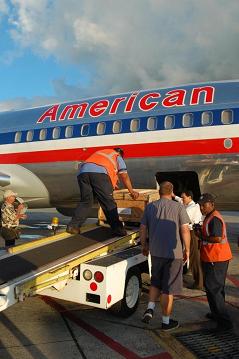 Sandy was met at the American Airlines facility at Miami International Airport by Turtle Hospital staff, Micah Rogers and Tom Luebke who performed a post trip examination prior to transporting to the Turtle Hospital (a 3 hour drive to Marathon). 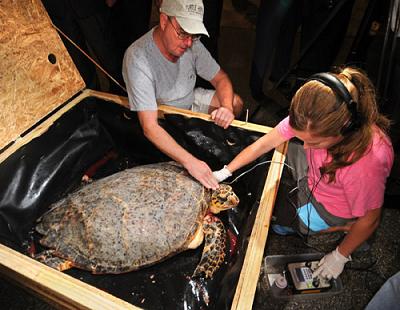 Upon arriving at the Hospital, Sandy had her wounds cleaned, x-rays, blood work up and antibiotics / vitamins administered. 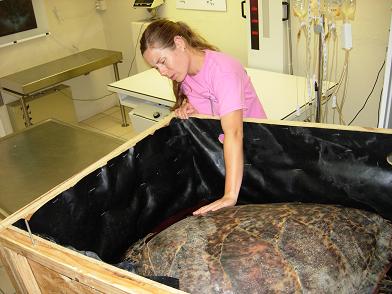 Sandy was placed in a salt water tank which provides cleansing action to the wounds and relieves pressure on the damaged flippers. 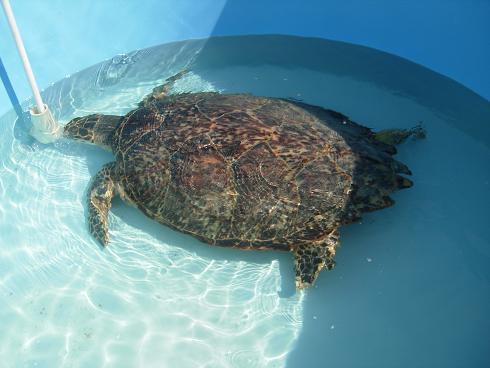 Dr Doug Mader (Marathon Veterinarian Hospital) examined the damaged flippers and determined the front right flipper will have to be amputated due to the severity of the damage. Surgery is scheduled for tomorrow morning. 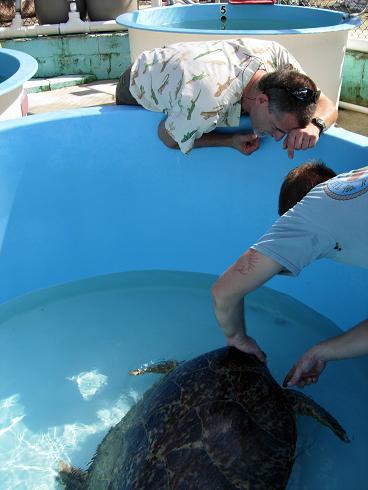 Dr Doug Mader amputated Sandy’s right front flipper today. The bones were damaged and skin and muscle was missing up to the shoulder area. The turtle was anesthetized and using a radio scalpel, Dr Doug cut surrounding tissue and muscle to allow removal of the flipper at the shoulder. The area was sutured shut. 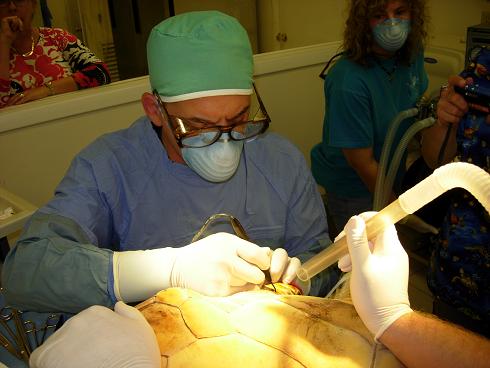 The other 3 flippers had loose skin and protruding bones removed. 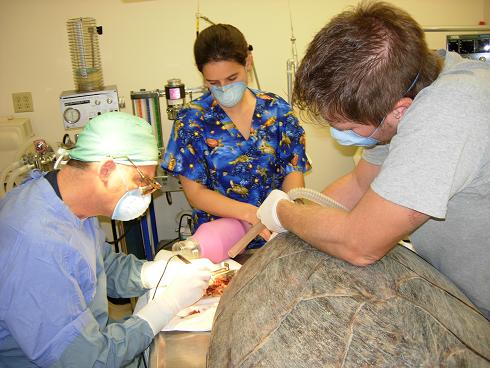 Sandy will spend the night “dry docked” to allow the anesthesia to wear off. She will be returned to her tank tomorrow and have daily wound care including debriding and cleansing.

Staff is optimistic for her recovery. Once the open wounds have healed, she will be placed in the large pool and evaluated for her swimming and diving capabilities.

Sandy was moved to her tank this morning. She is alert and strong. Staff cleaned and debrided the wounds, a process that will be repeated daily. Fluids, antibiotics and vitamins were also administered.

Sandy has her wounds tended to daily. 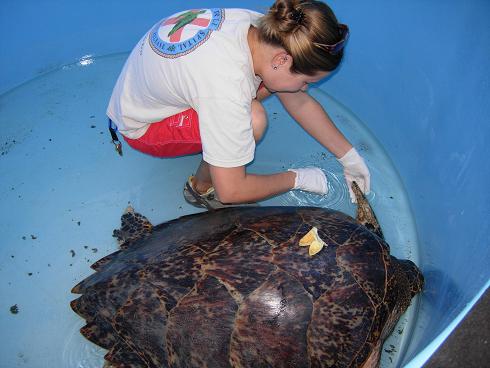 She has not started eating on her own yet. Wild turtles brought into a captive environment have an adjustment period where their natural food sources are not available and they are offered squid and shrimp. Turtles that have endured a great deal of trauma, have been under anesthesia for operations or on antibiotics also may not have an appetite. The healing process requires calories and staff has started “placement feeding” where squid bodies are “placed” down into the esophagus on the end of a plastic hose. The turtle’s mouth is kept open using a “bite block” (in this case a piece of hose). 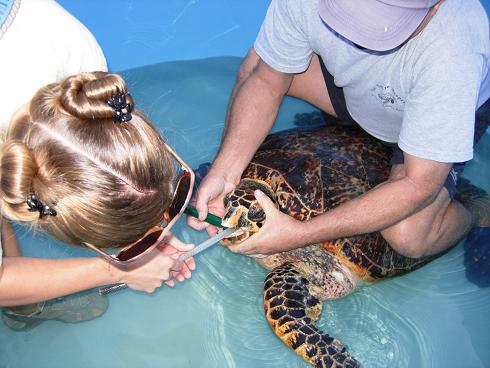 The feeding is fairly demanding. The turtle’s head must be out of water during the placement, with neck straight out and extended. Needless to say, the turtle is often fairly active during the process and requires at least two persons to safely control and feed the patient. After placing one or two squid, the turtle is immersed in water which it needs to swallow. After swallowing and a couple of breathes, the process is repeated until the required number of squid have been fed. This activity is performed daily.

Sandy has been moved out of her treatment tank and into the shallow end of the main pool. This will allow her to adjust to swimming and diving with only 3 flippers. 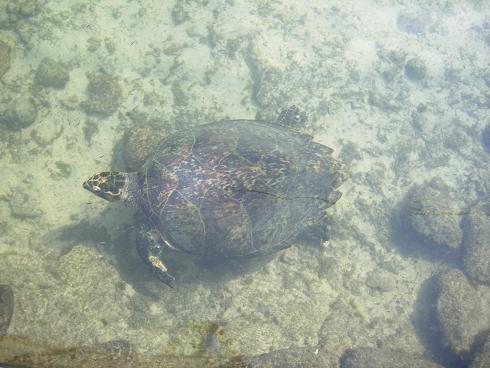 She is very calm in the pool, swimming slowly and checking out her roommates (she is sharing the area with several small, non aggressive Green turtles) or just sitting on the bottom. Coming up for a breath presents no problems for her. 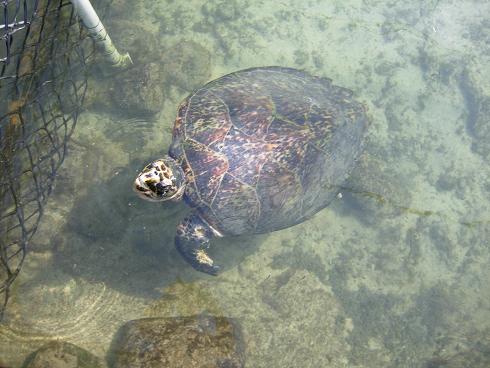