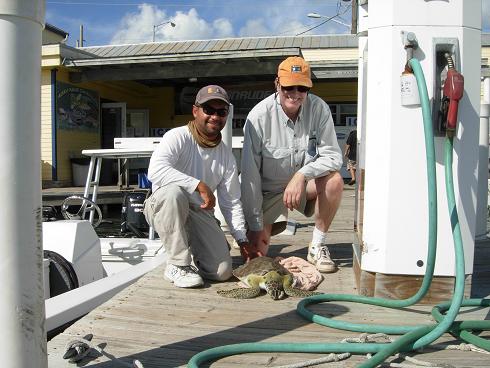 Charter Boat Captain Steve of The Galloping Ghost in Key West is a true Sea Turtle Rescuer! On Saturday, November 21st Steve was out flats fishing with a client when he noticed a small turtle floating by. He was able to reach out and pull the tired and weak turtle on his boat. This was the first time he would ever rescue a sea turtle in distress but not the last! Turtle Hospital staff met Steve on Stock Island to pick up the small turtle he named Melissa, after his wife. Melissa is suffering from Fibropapilloma, a virus that causes tumor-like growths on sea turtles. Amazingly, only a few short days later on November 23rd, he was out fishing again and brought in a very big catch! A 210 pound adult Loggerhead sea turtle! 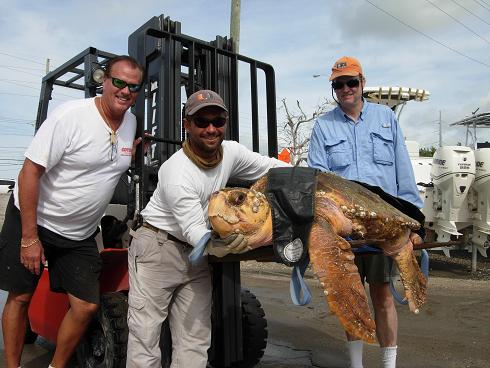 Named Stevie, this adult male Loggerhead sea turtle appears to have a shell infection. Stevie was so large that it took a fork lift to move him from the boat to The Turtle Hospital ambulance! Back at The Turtle Hospital, Stevie is being treated with antibiotics as well as a topical anti-biotic to prevent further damage from the infection. We expect a full recovery from Stevie. Melissa, the first turtle rescued, is awaiting an endoscope to check for internal tumors. As long as Melissa has no internal tumors, staff from The Marathon Veterinary Hospital will remove her external tumors. She will then remain here at the hospital for one year under observation to ensure she has no re-growths.

Stevie the Loggerhead, Melissa the Green and The Turtle Hospital Staff would like to extend a special Thank You to Captain Steve for saving the life of not just one but two endangered sea turtles!

Good news! Melissa has no internal tumors! Surgery will be scheduled to remove the external tumors. Stevie also continues to show improvement but is being treated with antibiotics to continue fighting the infection.

Stevie, a 200 pound adult Loggerhead, was rescued in November by Captain Steve of The Galloping Ghost. Suffering from an infection, the large male sea turtle was stuck at the surface unable to dive. Once at The Turtle Hospital, treatment included antibiotic therapy, vitamins and a little rest and relaxation.

Five months had passed since his rescue and Stevie was feeling like a brand new turtle! Once the infection cleared Stevie was more than ready to return to his ocean home. On a beautiful Sunday evening, just before sunset, a crowd of more than 300 fans gathered to wish him well and say goodbye.

The Turtle Hospital would like to sincerely thank all who attended the release!