An adult female Loggerhead Sea Turtle was rescued by fishermen off of Gieger Key. The 226 pound turtle was floating and had a recent shark bite which removed over half of it’s right front flipper. The left front flipper was half missing due to an old wound and the left rear flipper was also missing due to an old wound. Stella’s fate is uncertain at this time as a turtle with only one flipper can not swim which it needs to do to come up for air. Doctor Mader and Turtle Hospital staff will evaluate the requirements for surgeries to close the fresh and old wounds and the possibility of the turtle becoming an educational animal. 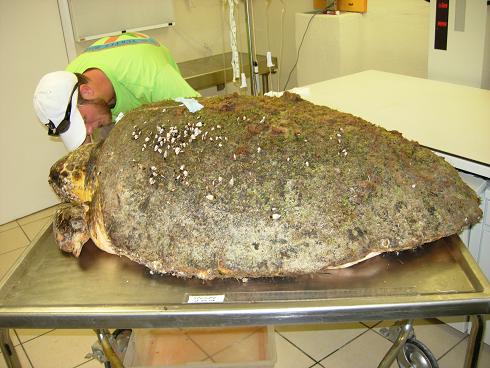 Update – March 4, 2008 Dr Doug Mader and staff performed surgery to remove bone fragments and close areas of the wound using a radio scalpel. Honey is used to help the wound granulate in. Stella remains very strong and is eating offered squid. TH staff will continue to administer antibiotics / vitamins and do daily cleaning and dressing change of wound. Fitting the turtle with prosthetic front flippers is being discussed. 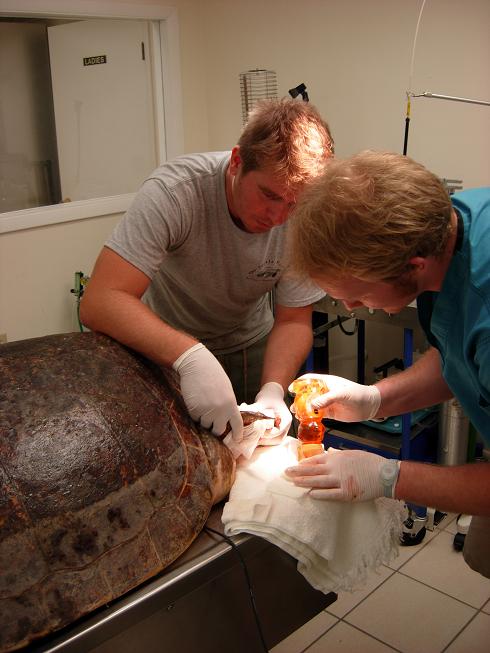 Stella has unexpectedly died. Necropsy did not identify a specific cause and a number of organ biopsies has been sent to the lab for analysis.