Last Sunday, we received a call regarding a turtle floating in a canal in Key Largo. The turtle was spotted promptly upon arrival; however catching the wily creature proved a bit more difficult. The 40-pound Green turtle was able to dive and evade capture for nearly an hour. Once captured and transported to the Hospital, it was determined that the turtle, named TC, had survived an incredible encounter with a large shark a few weeks prior. The turtle has a large semi-circular wound (approx 12 inches in diameter) on her left side.

TC continues to float, possibly due to an infection, but has made a remarkable recovery thus far. She will remain in the care of The Turtle Hospital until she no longer floats and is able to stay at the bottom of the tank. She is an incredibly lucky turtle. She should make a full recovery, and she will always have a really cool scar to show off to the other turtles! 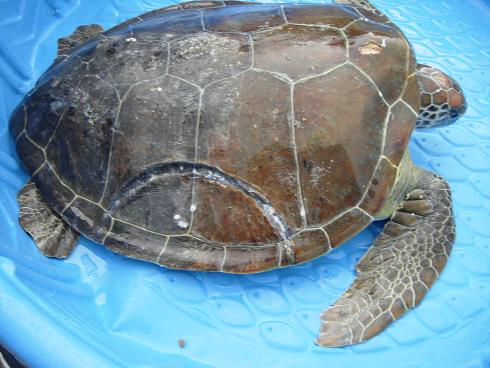 Hobie TC, although recovered from the shark attack, continues to float despite treatment with antibiotics and laxatives. Therefore, TC has been moved to the main area of our 100,000gl saltwater swimming pool. TC may be a bubble-butt which would leave her permanently floating.  There currently is no cure for this syndrome, so TC may not be released.

Hobie TC has moved to a new home at The Living Planet Aquarium in Utah!