The FWC received a report of a floating Loggerhead Sea Turtle in Kemp’s Channel, near Little Torch Key. The Florida Keys Marine Sanctuary was contacted and Team Ocean coordinator Todd Hitchins along with volunteer Peter Moorcroft responded. They were able to locate the 102 pound turtle which was swimming on the surface and unable to dive. The turtle came right up to the side of the boat which is not normal but made rescuing a lot easier. The Turtle Hospital met their boat at a nearby marina and transported the animal back to Marathon in the ambulance. 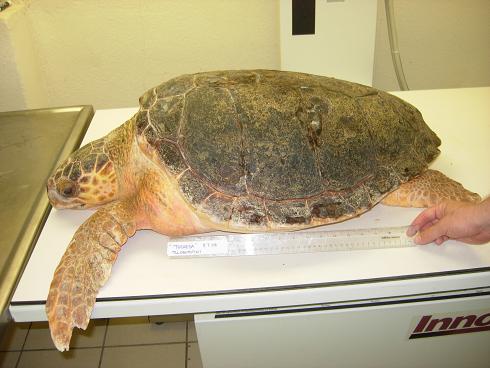 Theresa is very active and strong. X-rays did not show any impaction and blood work did not identify any issue. When put in a tank with shallow water, the turtle would constantly swim in to the side of the tank, biting at the tank walls. This is not typical. Usually a turtle will find the walls of the tanks and quickly learn that they can not go any farther. Also, there is no interest in offered food. Staff has done some basic vision testing and there is no response to movement or brightness changes close to either eye. Veterinarian staff will do additional evaluation to determine if Theresa has a vision problem.

Sadly, suddenly and unexpectedly, Theresa has died. The turtle was in a shallow tank and was being monitored hourly and was very active / strong at the last check. Staff suspects the turtle had a neurological disorder, causing the blindness, constant swimming and biting. A necropsy will be performed to determine what was cause of the problems.