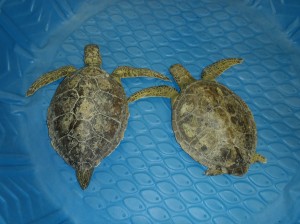 Juvenile greens Hess and Fiddle arrived at The Turtle Hospital on March 12th, transfers from Sea World’s rehab facility. FP tumors sprouted on Fiddle shortly after his rescue by Sea World, and so he came to us where our favorite veterinarian, Dr. Mader, zapped off the growths. Fiddle is also recovering from a boat strike on the rear of his carapace that paralyzed his rear flippers. These flippers were also nibbled on by a predator. Nevertheless, Fiddle swims like a maniac and remains a feisty individual during med time. His suite-mate in Orlando, Hess, came along as well having been treated for emaciation and lethargy.  Due to malnourishment, Hess received a blood transfusion from a sea turtle donor back at Sea World! We’re beefing up Hess, getting some meat on those bones, and hope to release her soon!