On Thursday February 17th, a large floating Loggerhead sea turtle was reported to FWC by multiple people while boating on the Oceanside of Islamorada. The turtle was in obvious distress due to the fact that it was unable to dive and kept bobbing back up to the surface where the animal was in serious danger of oncoming boat traffic. FWC made a swift rescue and the Loggerhead was soon named Charley!  Since this is the second Charley in rehab, the turtle is now deemed Charley II. 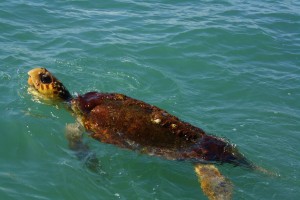 Charley II was x-rayed and seen to have some gas in his intestinal tract.  Charley II is also slightly underweight and is being fed lots of yummy squid with vegetable oil and bean-o to help him gain some weight and get all of that gas out of him! Charley II wants to thank his rescuers and is enjoying his stay and resting in his hospital tank here at The Turtle Hospital! 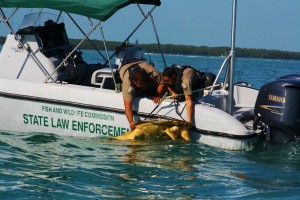 UPDATE: 4/24/11  About 1 week ago Charley II was found sitting on the bottom of his tank!  This is such great news because when Charley II first came in he could not dive.  Charley II now needs blood drawn and a new x-ray to determine is he is ready for release!