Home  » Past Patients Blog » Releases » Where Will Sharon-Tilly Go? 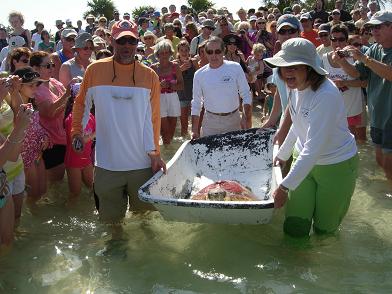 Sharon-Tilly, a sub adult Loggerhead, was released Thursday March 25th from Bahia Honda State Park! Sharon-Tilly was rescued by Doug and Sharon Largent, found floating near Bahia Honda and treated at The Turtle Hospital for an impaction. After 4 short months of laxitive therapy to help her pass the impaction, Sharon-Tilly was ready for release…..well not quite yet.

Satellite tags transmit a signal to polar orbiting satellites which allow us to detect the position of the tagged sea turtle. Approximately the size of a cell phone, the tags monitor parameters such as water temperature, how deep the turtle dives, how fast they swim and where they go. While we obtain extremely valuable information from these tags they do have limiting factors. The average life span of the tag is typically one year or less. Another factor is cost. The price of each tag can range between $3,000 and $6,000 depending on the kind of  information collected in addition to the cost of satellite monitoring.

Thanks to a generous donation from Doug and Sharon Largent (Sharons rescuers), The Turtle Hospital was able to place our first ever satellite transmitter on one of our sea turtles courtesy of Mote Marine Laboratory. For the first time ever we will be able to see where one of our rehabilitated sea turtles travel. You can to! Thanks to seaturtle.org and Mote Marine Laboratory you can view the path that Sharon-Tilly takes and track her with us!

Where will Sharon-Tilly Go? Click here to find out: http://www.seaturtle.org/tracking/index.shtml?keyword=sharon-tilly 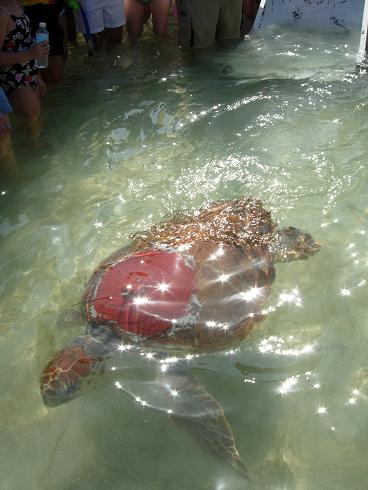 The Turtle Hospital would like to extend an extra special THANK YOU to Doug and Sharon Largent, who not only rescued Sharon-Tilly, but through donations during her rehabilitation helped Sharon-Tilly recover. Without their generous donation for the satellite transmitter as well, we would never know where Sharon-Tilly will go.