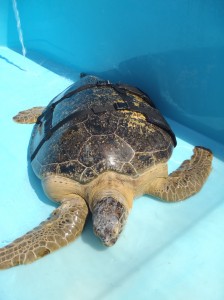 Four-year permanent resident O.D. is packing on the pounds this week with a newly fitted temporary weight belt.  Rehab staff member–and quite the engineer–Gunnar created the contraption out of SCUBA weight belts.  With 7.5 pounds extra weight, O.D. can once again swim gracefully through the water.  The 330-lb adult green previously had weights attached directly to his shell but because sea turtles shed their scutes, those weights eventually fell off.  The shell often becomes slightly soft and vulnerable in the region where these weights were once attached.  Allowing for the shell to strengthen before once more affixing weights directly, O.D. will sport this harness for a few weeks.<img class="aligncenter size-medium wp-image-3002" title="” src=”https://www.turtlehospital.org/files/2012/04/OD-1-300×225.jpg” alt=”” width=”300″ height=”225″ />

O.D. ‘s story is unique.  The turtle stranded in North Carolina in 2007 with a left lung infection, was released, and re-stranded a year later here in the Florida Keys.  The lung issue is unfortunately a permanent ailment and left O.D. with buoyancy issues on the left side.  He cannot properly dive down without the addition of weights to offset the buoyancy and so is non-releasable.  We have been actively searching for a new home for O.D. (short for “Ocean Dive”) in a zoo or aquarium.  While we would miss him here at The Turtle Hospital, this big guy is ready to be the star in his own turtle tank somewhere.