The FWC received reports of a floating turtle in the area of French reef. The initial response boat was unable to manage the turtle and sent out a radio request for assistance. Ocean Divers (out of Key Largo) was in the area with a dive party and responded. Having a larger boat (the Santana) with lower sides (and plenty of muscle), the 283 pound adult male Green Sea Turtle was captured. 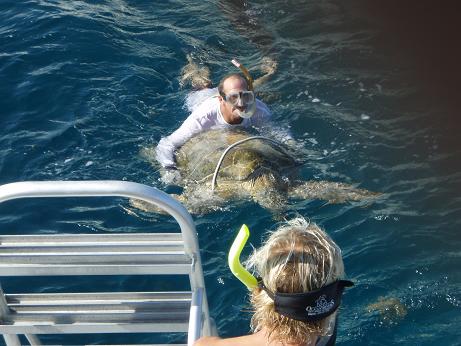 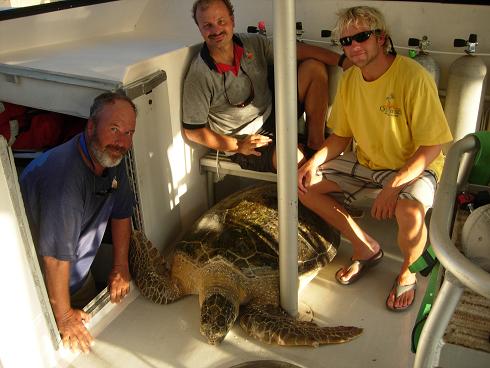 This is the second largest turtle that has been brought in to the Turtle Hospital for treatment. Staff, Micah Rogers had the challenge to keep OD in a kiddie pool (in the ambulance) during the 1 hour transport from Key Largo to Marathon. 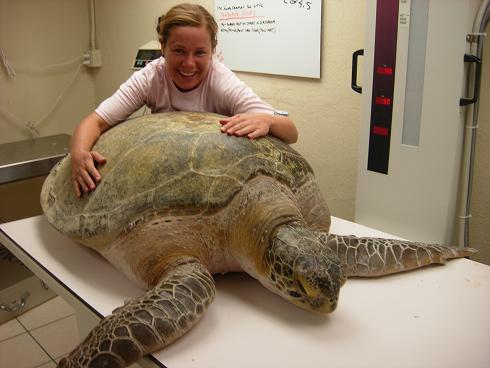 The turtle has flipper tags and a PIT tag (microchip). The FWC will determine if OD has been previously rehabilitated or is part of a study (tag and release) program. Initial examination finds no external trauma. X-rays indicate a possible lung infection which will be validated by blood analysis. The turtle is very active and strong and has been started on antibiotics.

OD continues to be strong and active. Administration of injectable medications and fluids prove to be a challenge for the staff. The cause of floating is a body cavity infection which is being treated by antibiotics.

Tag information traces the turtle back to being a patient at the Karen Beasley Sea Turtle Rescue and Rehab Center. They also treated OD (know to them as Pepper) for a body cavity infection, causing floating, from July 1999 to release in Oct 2001. 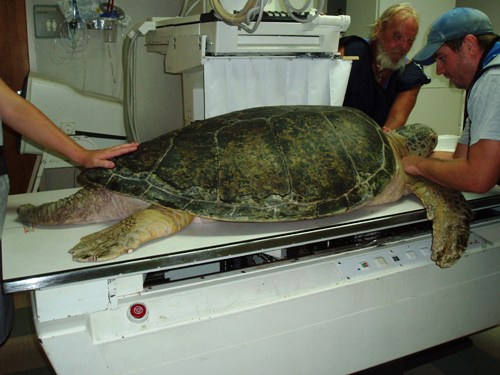 Although The Turtle Hospital is a certified veterinary clinic for sea turtles, which includes a fully equipped Emergency Room and Operating Room, a turtle name OD presented staff with a problem. OD is a 300 lb. adult male Green sea turtle, the second largest sea turtle ever treated at our facility, who has a persistent floating problem. Typically sea turtles float due to an infection, an impaction (often caused by trash ingestion) or air trapped in the body cavity after a boat hit. These patients are treated with antibiotics or laxatives to cure infections or pass impactions. However, after a course of antibiotics and a series of x-rays The Turtle Hospital needed some assistance. OD continued to float which led staff to believe he may have a problem with his lungs. Due to his size, it was quite difficult to get a clear x-ray needed to identify the problem. 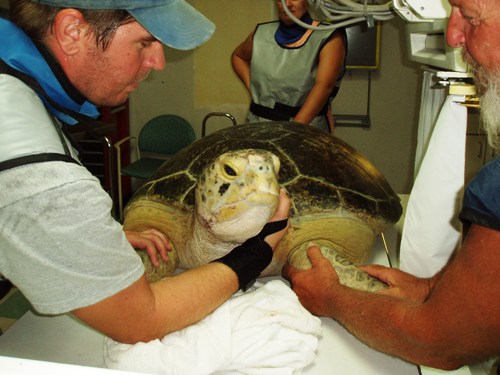 OD has been fitted with a divers weight belt with 5 pounds of weight on the left side. With his new dive belt OD is able to sit at the bottom of the pool comfortably. He has now been moved into the deep end of our 100,000gl. saltwater pool where he lazily swims from his resting place on the sandy bottom to the surface for a back scratch or an extra squid snack in the afternoon.