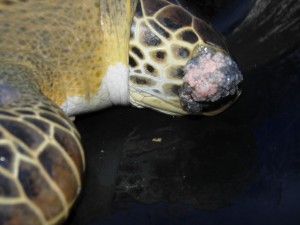 Green sea turtle Andrew came in on August 25, 2009 with multiple Fibropapilloma tumors growing on his skin and eyes. He was slightly underweight at 22 pounds on arrival and covered in algae and leeches. Turtles with an overgrowth of algae on their carapace is usually a good indicator that they have been swimming slowly and feeling sick for some time. On September 9, 2009 he underwent surgery to remove his right eye, tumors from his left eye and rear flippers. We routinely endoscope tumor turtles upon arrival to ensure there are no internal tumors growing. Funny story, we found ovaries when we endoscoped Andrew… surprise it’s a girl! Andrew recovered well but by January was regrowing tumors. After five months of routine surgeries and regrowths Andrew finally appeared to be done with fibropapillomas. She remained free of tumor regrowths for one year and was released at a healthy weight of 33 pounds by Florida Fish and Wildlife Commission at Munion Island, Palm Beach County on August 31, 2011. 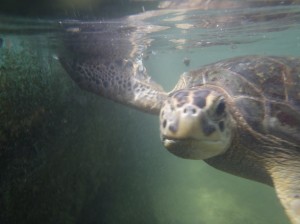