When Joe was rescued in December 2009 when fishermen off of Saddlebunch Key found little 3-pound green turtle Joe struggling to swim. Upon rescue, they realized this was because Joe only had two flippers! Once admitted to The Turtle Hospital, staff determined that Joe was most likely born without a left rear flipper, and unfortunately for Joe, it appears that he was attacked by a predator which removed a significant portion of his left front flipper as well.

But Joe is a survivor! We kept Joe under our watchful eye for a year and a half, feeding him plenty to ensure he grew stronger and faster. We have never released a turtle with two missing flippers on the same side before, but Joe is able to swim very fast and straight. He was evaluated by our veterinarian Dr. Doug Mader as well as FWC staff, and all agreed with us that Joe was ready to be released.  On Thursday, September 15, this now 15-pound turtle was taken in our founder Richie Moretti’s boat far into Florida Bay where the seagrass beds are plentiful and there is very little boat traffic.  Last seen, Joe was happily munching away on seagrass.  Good luck little Joe! 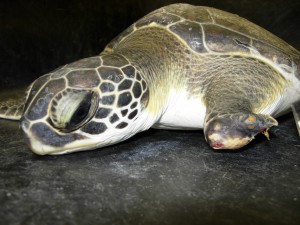