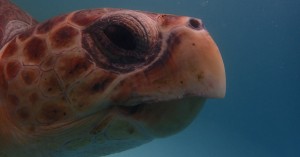 The Turtle Ambulance arrived with Dorothy, a 110 pound loggerhead sea turtle at 10:30 a.m.  and she was released at 11:00a.m. Dorothy checked into the Turtle Hospital back in July 2014.  One of her rescuers and her namesake, Dorothy, a 90 something year old Marathon resident spotted her floating at the surface near Sister’s Creek, unable to dive.  Dorothy the sea turtle was treated for infection, high glucose, and an impaction.  Dorothy’s treatment at the Turtle Hospital included broad spectrum antibiotics, lactulose, beano, insulin, vitamins, and a healthy diet.  Dorothy received a very special visit during her recovery at the Turtle Hospital from her rescuer Dorothy! Dorothy is back to good health and has been returned to her ocean home!  Click here to see Dorothy’s Video! and release! 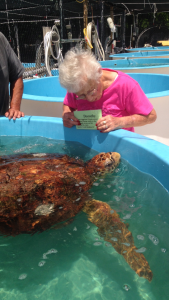