Lucas, a green sea turtle named after his rescuer Matthew Boucher’s son, was released on September 1 after being here at the hospital for over two years. When Lucas first arrived at the hospital, he had fibropapilloma tumors growing in his right eye and around his rear flippers.  It took seven seperate procedures to remove the fibropapilloma tumors, because there was some regrowth of tumors.  He has remained tumor free for over a year and has grown from 11.8 pounds to 37 pounds, and his shell length increased from 36.4 to 50.1 centimeters. We are happy to report that Lucas swam away quickly when he was released. 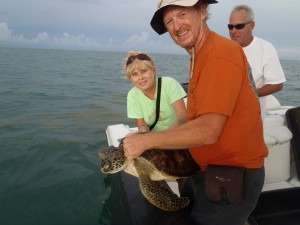