It is with very mixed emotion that we report on the release of our Education Turtle, Scooter.  Scooter has been at The Turtle Hospital for three years, and in that time, he became everyone’s favorite turtle.  Scooter was very photogenic and somewhat famous because of it.  He has appeared all over the world in various media, including National Geographic coverage of him eating a jellyfish.  He also went to all the local events and helped us educate everyone about sea turtles and the problems they face primarily due to human impacts.

Scooter, a loggerhead sea turtle, came to us as a 2-inch hatchling found in a local canal.  He may have been disoriented after emerging from his nest in order to wind up in a canal instead of out in the ocean camouflaged in a sargassum seaweed bed. Disorientations occur when artificial lighting draws hatchlings away from their normal trek.  He also may have been a “washback,” a term used to describe hatchlings that made it out to seaweed beds only to wash back in due to storms or heavy winds. Because of the cold temperatures at the time of his rescue, Scooter stayed with us for the winter.  He then needed to grow to subadult size, the appropriate size for loggerheads in our local waters, before he could be released.

Scooter was growing at a pace of .25 cm per month in the summer, but recently had a growth spurt and grew over 1.5 cm per month to reach the 45 cm minimum size required for release.  It happened so fast that we were not emotionally prepared to let him go, but Scooter was ready to leave us, proving this by passing all the tests to assure he could catch and eat live food in the wild.

Scooter was released in the Content Keys north of Big Pine, a pristine portion of the Florida Keys National Wildlife Refuge, by refuge biologist Tom Wilmers and Turtle Hospital founder Richie Moretti.  Director of the US Fish & Wildlife Service Dan Ashe and his Chief of Staff Betsy Hilldebrand, pictured below with Richie, were the last to meet Scooter before his release. 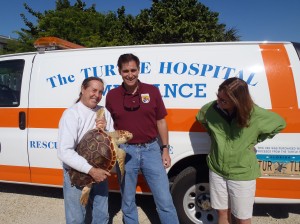 Bon Voyage, Scooter. May you be the one out of a thousand that survives!