The Turtle Hospital is excited to announce a public sea turtle release scheduled for Saturday, February 28th at 11:30 a.m. 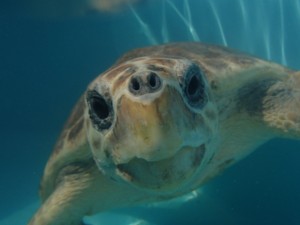 Please join us on Higg’s Beach behind Salute restaurant, 1000 Atlantic Blvd., Key West as we cheer on Grinch, an adult loggerhead sea turtle.  Grinch was found floating in a canal on Gieger Key Christmas Eve.  X-rays revealed Grinch was suffering from an impaction in his intestines.  Treatment at the Turtle Hospital consisted of broad spectrum antibiotics, lactulose, beano, vitamins, and a diet of fish and squid.  Grinch passed his impaction and is now healthy and ready to return to his ocean home.  Grinch will arrive in the turtle ambulance at Higg’s Beach at 11:30 a.m. on Saturday for a 12:00 p.m. release.  See you there! 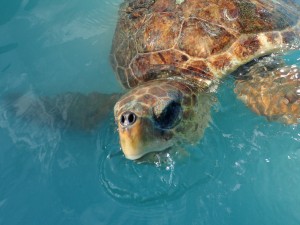