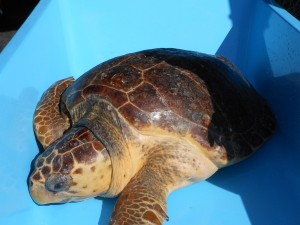 Sandy waiting to go home before the actual release. 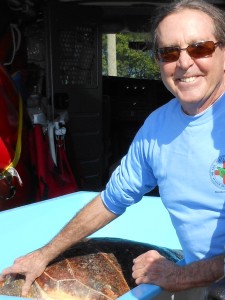 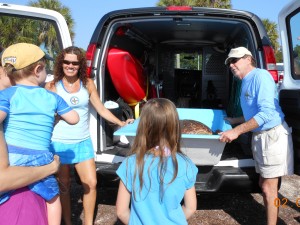 Richie and Bette talking with the kids in the group.

On Feb. 9, 2013, I went to Islamorada to watch my first Sea Turtle Release.  I thought I would just get to take pictures but when I got there I got the biggest surprise ever, I got to be a part of it.  It was one of the most heart warming experiences of my life.  I was excited enough thinking of watching Sandy be released back out into the ocean.  This loggerhead turtle had been accidentally hooked by a fisherman and she was ready to get back home.  When they were looking for a couple more people to help carry Sandy in her tub, out to the water, I was thinking, “Me, me, please pick me!”  And when Richie said, “Let’s let these two help us.”(referring to me and my co-worker), I felt like I had just won the lottery.   It is an experience I will never forget for the rest of my life.  The first “feel good feelings” started when I saw a couple that had been in one of my recent educational programs.  I ended up walking with them to the beach where they were going to release Sandy.  Felt like running into old friends.  Then I kept hearing other people say my name and saw others that had been in my programs.  Felt so great to think I had been an influence on them to give them a desire to come and watch this great event.  And one of the things that will always stay with me is how much Richie shined when he was talking to the crowd.  He was so great with the kids.  I felt like he will be a huge influence on how they treat the environment around them and I believe they will never forget about the sea turtles.  I think they will end up following in Richie’s footsteps one day.  But the highlight of this day was being in the group of six, that carried Sandy in her tub out into the ocean.  Sandy was moving around and you could just FEEL her excitement.  I am not ashamed to admit, I had big tears in my eyes as we carried that turtle back home.  Seeing her swim away from us, was one of the most profound experiences of my life.  Yes, we may help rescue sea turtles at The Turtle Hospital but in a way the turtles rescue all of us as well.  They give us that feeling deep inside that we are a part of something bigger.  That we are helping to set something right in the world and hopefully leaving the world a better place. There isn’t a better feeling in the whole world. 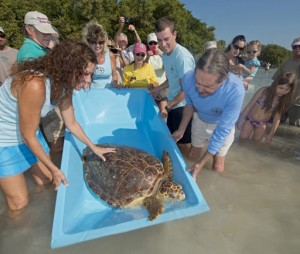 A pic that captured it all….