The TOTAL REWARD IS NOW $13,850, PLUS 3 free dives, 3 free fishing trips, 8 hours of free welding & fabrication, AND free picture framing and design consultation! The reward is for information leading to the arrest and conviction of the person(s) who speared a loggerhead sea turtle that was rescued on August 3, 2011, offshore near Big Pine Key. Please call (305) 743-2552 with information. You may remain anonymous.

On August 13, the Sevors of Lake Mary pledged $1,000 toward the reward, and the Copes at Island Decor in Tavernier pledged the custom picture framing and 5 hours of interior design consultation. On August 12, Don and Carol Urfer of Sarasota and their son Joe of Marathon added $500. On August 11, Cameron and Gerri Jewell of Key West pledged $500 and on August 10, Florida Keys public relations firm NewmanPR added $100. On August 9, Save-A-Turtle of the Florida Keys pledged $500 and Kipp’s Welding & Fabrication of Key Largo pledged 8 hours free welding anywhere in the Florida Keys. The reward increased by $7,500 on August 8 when long-time sea turtle volunteer and Turtle Hospital engineer Tom Luebke pledged $4,000, which was promptly matched by Hospital founder Richie Moretti who added $3,500 to his original reward of $500. 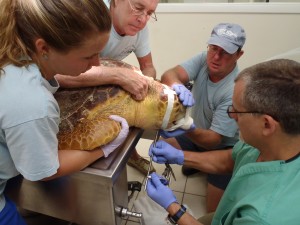 Nicholas Borg and his father were fishing about 3 miles off of Big Pine Key (between Little Palm Island and Looe Key) when they saw the turtle struggling to come up for air with a 4-foot spear sticking out of its head. They contacted the Coast Guard (you need permission to rescue a  sea turtle, a protected species). It took them 40 minutes to catch the turtle and bring it onboard.  Jo Ellen Basile and Bob Smargiassi of The Turtle Hospital drove the turtle ambulance to Big Pine Key to meet the rescuers when they docked their boat at their home.

When staff saw the loggerhead turtle on the boat with the spear in its head, they immediately contacted Dr. Doug Mader of Marathon Veterinary Hospital. Dr. Mader and his associates volunteer their time to treat Turtle Hospital patients.  Hospital staff also contacted Monroe County Fire Rescue to help cut off the metal spear for safer and easier transport to the Hospital.

Dr. Mader examined the turtle and administered a sedative. Fire Station 13, Shift A (Lt. Tillman) responded and sawed off the end of the spear.  The Borg family gathered around in support as we worked on the turtle and shared with us the fact that they were supposed to be celebrating their daughter Sara’s birthday at that time.  For this reason, they chose to name the turtle “Sara,” in her honor.

Sara was stabilized, x-rayed, and given antibiotics that night.  X-rays showed the spear going almost through the head behind the eye and across the back of the throat in front of the glottis. The spear in front of the glottis, which opens and closes to allow the sea turtle to breathe without getting water in its lungs, was causing a fluttering sound with each breath that ceased once the spear was removed the next  morning.  The spear could not be pulled out due to the location of the barb, so Dr. Mader quickly removed the spear by pushing it through an already existing exit hole where the spear had at some point come through the other side of the head.  The spear was taken into evidence by the Florida Fish and Wildlife Conservation Commission. 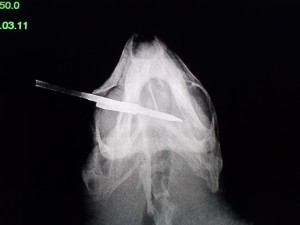 Sara is a 125-pound subadult loggerhead sea turtle in otherwise good condition.  She is already swimming vigorously in her hospital tank.  We expect a quick recovery for this very, very lucky turtle.  Every turtle is important, and we are happy that this one survived such a vicious act of cruelty as well as a violation of the US Endangered Species Act. 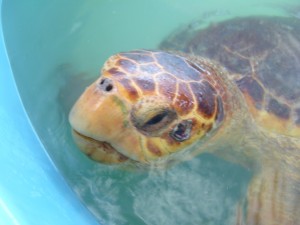