A good Samaritan fisherman was in the American Shoals area (offshore from Cudjoe Key) when he saw a turtle towing several floats and struggling to dive. The FWC was notified and Sue Schaf (sea turtle biologist) coordinated a rescue effort. 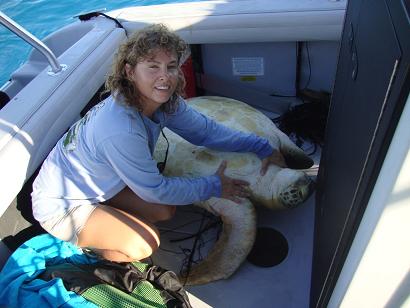 A FWC officer picked up the rescue team at a marina and headed out to the area where the turtle was last seen. With help from the fisherman, the turtle was located, netted and brought aboard the FWC boat where the net and lines were removed. 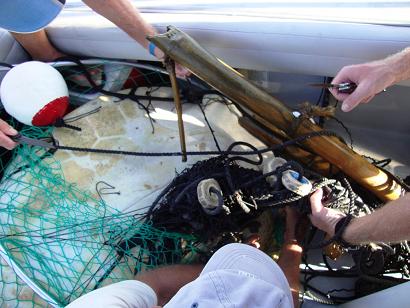 The 230 pound adult Green was tightly entangled in a drift net, two lobster trap lines / floats and a 6 foot piece of bamboo. The net had cut into the marginal scutes and the bases of the front flippers. 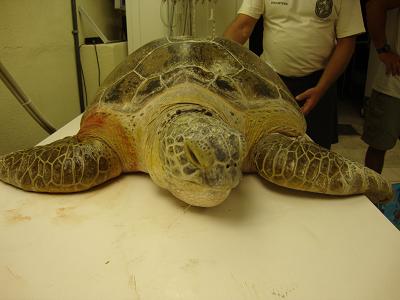 Mitchell (the turtle, named for it’s rescuer) was transported to the Turtle Hospital where it will receive wound care and antibiotics.

Mitchell was released November 6th! The Turtle Hospital holds an annual Sea Turtle Workshop at our facility in Marathon Florida. More than 100 biologists, veterinarians, students and specialists attended this year.  In addition to hosting lectures and labs, on the eve of the final day of the conference Dr. Stacy and Dr. Ellis assisted Turtle Hospital administrator Ryan Butts and Rehabilitation Specialist Andy Dobrowolski in returning Mitchell back into his ocean home. 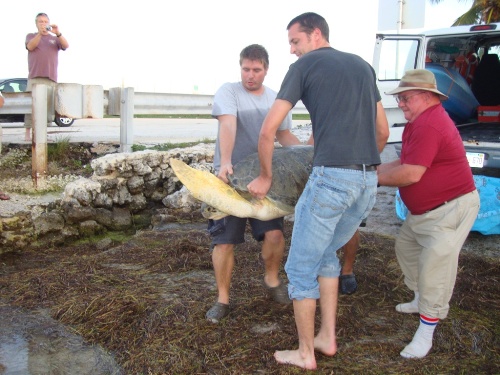