A Beautiful “Gem” Finds Us Again…

Wrapping up our busy week here at the hospital, last Monday on May 13th, our 25th rehab patient was admitted to the hospital.  A 112 lb sub adult loggerhead, named Sapphire, was found floating by Capt. Kerry Wingo and his Tails Up Fishing Charter company out of Island Bay Resort about 15 miles north of Lower Matecumbe Key in the upper keys region.  Ranger, Dan Kiger from Everglades National Park and Mike Shipley, owner of Island Bay Resort also provided assistance for Sapphire’s rescue. 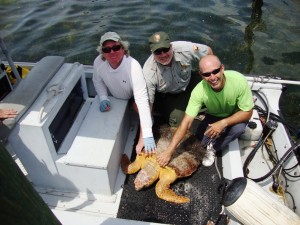 As she arrived at the hospital, the rehab staff were amused at the “skirt” she seemed to be wearing on the lower end of her carapace from all the epibiota that had developed while she had obviously been floating at the surface for multiple weeks and maybe even months.

We took measurements, shot xrays, and drew blood on Sapphire before putting her in her freshwater bath to remove all of her shell growth.  While she was being scrubbed down, a large crack and deformity in the back end of her carapace began to become evident.  This turtle had obviously suffered from some type of propeller injury in her past and her shell had actually completely healed on its own from that injury.  Although the left rear end of her carapace was completely missing and the right rear end had been pushed downward toward her tail, Sapphire still has full mobility in both of her back flippers. 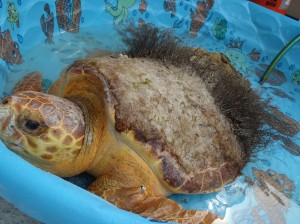 Upon Sapphire’s admittance it was noticed that this turtle had already been seen by a government organization or another hospital due to the metal flipper tag on each of her flippers.  Florida Fish and Wildlife Officer, Sue Schaf (who also helped with the turtle’s admittance) traced back the tag number to reveal that Sapphire had actually been admitted here at the Turtle Hospital in February of 2010!  Sapphire, who was then named Leoni, was found floating offshore of Islamorada with this same old propeller wound in the back of her carapace.  She had some air buildup in her body cavity, but within the following weeks she began to fully submerge herself below the surface and was released a month and a half later.

Currently, Sapphire is still floating with the rear end of her carapace in the water.  Her behavior will be closely monitored but xrays have revealed an impaction of crab and lobster shells built up in her stomach and intestines that might be causing her to float.  Her diet is currently being supplemented with vegetable oil to help lubricate her GI tract and help to get things digesting properly again.  Hopefully, when she has passed all of this digestive material she will no longer float and can be released back into the wild.  Stay posted for updates on Sapphire! 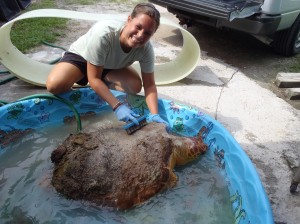