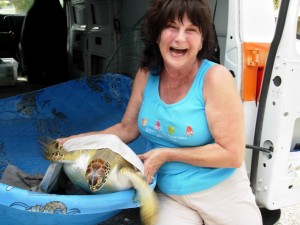 Ally, a young Green sea turtle, was found behind Nancy’s home in Big Pine Key. Ally was swimming in circles unable to dive for long periods of time inside the shallow canal. Once rescued, the problem quickly became apparent – she was suffering from a debilitating virus called Fibropapilloma. The tumors around Ally’s body had grown so large they literally were making her sick. One tumor, located around her rear flippers, weighs over a pound.

On November 2nd, Dr. Doug Mader was able to check Ally’s internal organs with an endoscope to see if she suffered from internal tumors as well. Luckily, she does not have any growths internally and surgery will be scheduled to remove the large external tumors. Post-op, Ally will remain at The Turtle Hospital for one year to ensure the tumors do not regrow.

Dr. Jackie (Marthon Veterinary Hospital) performed surgery to remove some of Ally’s massive tumors. One tumor taken from her right rear flipper weighed a pound! A second surgery will be necessary to remove to remaining tumors but for now, Ally is recovering well back in her tank.

Ally has passed. A necropsy was performed and in addition to having brain parasites, Ally most likely drowned.