Earlier in January, an 80 lb green sea turtle named “Paul” was admitted to our hospital with a humongous sized tumor growing on his right shoulder.  One of our current patients, “Jimbo”, holds the record for the biggest tumor we have seen here at the hospital with one weighing in at 3.2 lbs (“Jimbo” is doing great by the way and has almost reached his year of going tumor free!)  With “Paul’s” arrival we were sure that he would give “Jimbo’s” tumor a run for his money.  A month later after “Paul” had gained his strength, an endoscope was performed to ensure he had no internal tumors, and his blood levels were normal, Dr. Kristen from Marathon Veterinary Hospital was in to remove this incredibly uncomfortable tumor off of “Paul’s” shoulder along with getting him completely tumor free. 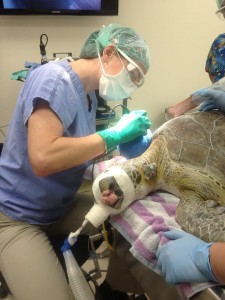 Dr. Kristen removing “Paul’s” 1.69 lb tumor off of his shoulder

Surgery was successful and staff held a contest on the Turtle Hospital’s Facebook page to guess the weight of Paul’s tumor for a free Turtle Hospital shirt.  The correct weight ended up being only 1.69 lbs, although we are sure “Paul” also thought it weighed much more than that.  “Paul” is doing well with his recovery after his tumor removals and looks like a brand new happy and healthy tumor free turtle.  Thanks to Dr. Kristen for volunteering her time to get “Paul” tumor free on her day off along with all of “Paul’s” supporters throughout the Turtle Hospital community. 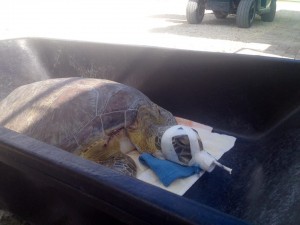 “Paul” waking up from his surgery. Notice the softball sized tumor is gone off his right shoulder