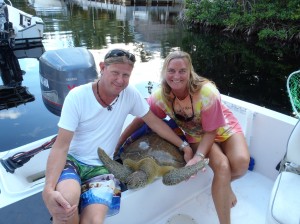 On September 29, Kirk and Kim Weatherly, were enjoying a boat ride in North Creek, Key Largo,  when they noticed a sea turtle unable to dive down from the surface, floating, and struggling. In order to rescue this turtle Kirk dove in to catch him and had a little bit of a rodeo before the turtle was able to be pulled up onto the boat. The green turtle weighed 70 lbs. and also had an old boat strike to the back of the shell, leaving an old fracture, and a deformity. Once the turtle hospital staff made it to Key Largo from Marathon they were able to asses the turtles condition. Kim and Kirk decided to name their rescue Chance. Very fitting name! Back at the Hospital Chance received triage and x-rays. Chance had an excessive amount of gas in his intestines which causes turtles to float! To help his symptoms we started chance on fiber, beano, and gas-x. In addition Chance is on antibiotics. He eats well and is starting to slowly sink lower and lower into the water! That means the gas is going down! We have moved him to our large rehabilitation tank where he can exercise and work on diving down to the bottom. Chance has a great demeanor and is quickly becoming a favorite of the rehabbers. 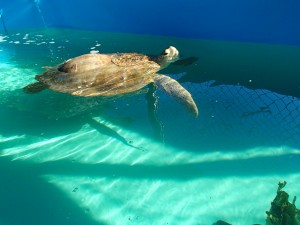