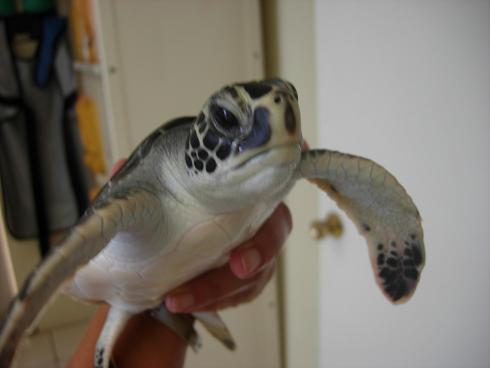 Charlie, a post hatchling green sea turtle, was found floating inside Biscayne Bay in Miami Dade County. This tiny sea turtle had ingested a plastic bag, and was found with it protruding out of his mouth! Luckily his rescuer was able to safely remove a majority of the bag from his mouth. However, concerned that he may have already swallowed pieces of plastic, Charlie was driven 3 1/2 hours to The Turtle Hospital. Good thing! Charlie does have a small impaction visible on x-ray, which means he had in fact ingested some of the bag. Charlie is currently being given Vegetable Oil in his food to help him safely pass the impaction. Once the plastic has been passed, Charlie will be released offshore inside the Sargassum weedline.

Charlie was released over Labor Day Weekend! In less than one month, he had successfully passed the piece of ingested plastic bag and was ready to go home! Charlie was taken via boat to the Gulf Stream and released in a large mat of Sargassum.