Boaters spotted a sub adult Green Sea Turtle, floating, about a mile off shore from Key Colony Beach. US Coast Guard Marathon dispatched a boat and picked up the turtle. 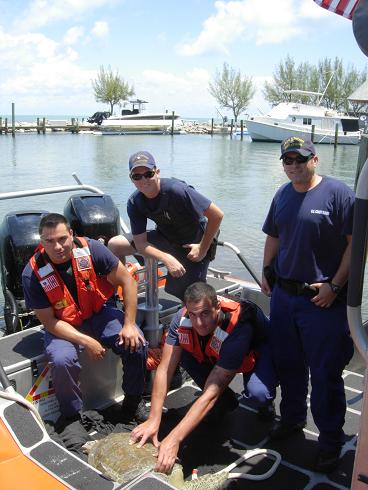 Chase (as named by the Coast Guard) has an intestinal impaction which would cause the floating problem.

Chase has flipper tags and a PIT tag (microchip) which have been investigated by the FWC and tracked back to Clearwater Aquarium who treated and released the turtle in 2006.

Chase has been moved to the large area of our 100,000gl. saltwater pool. After treatment with antibiotics and laxatives Chase sadly continues to float. Our fear is that Chase may suffer from bubble-butt syndrome, which leaves the afflicted sea turtle permanently floating.  There currently is no cure for this syndrome, so Chase may be one of our new permanent residents.