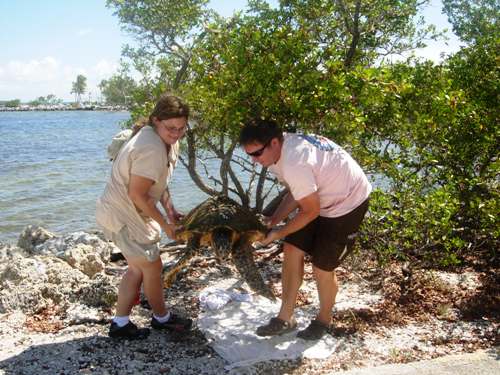 Duncan, a 70 pound adult male Hawksbill, was rescued June 20th 2010. Duncan was found listlessly floating and unresponsive by concerned good Samaritans who called The Turtle Hospital for help. Hawksbill sea turtles are a critically endangered species and adults are not commonly seen off the Florida Keys. At 70 pounds, Duncan is severely underweight and staff estimates that he should weigh 100 pounds. Hawksbill sea turtles average 100-150 pounds when fully grown. 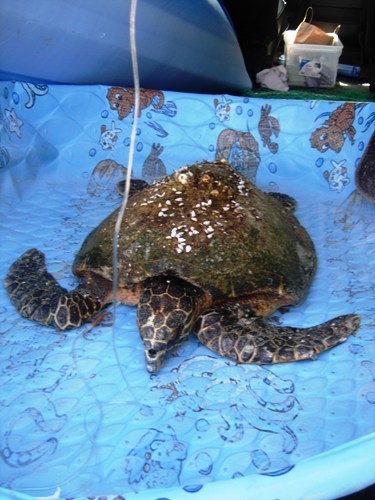 Back at The Turtle Hospital staff performed an x-ray on Duncan which revealed a severe impaction. Sea turtles often ingest foreign objects such as plastics which become lodged in the intestines. Since Duncan was unable to pass any waste, built up gas in the intestines had left him floating and unable to dive to find food. Duncan is currently in critical condition and being tube fed a small amount of squid with fiber pills added to help him pass the blockage and gain weight.

Sadly, Duncan has passed. After two months of treatment he continued to remain unstable despite staff’s best efforts. The impaction was so severe and Duncan was so emaciated that he could not survive his injuries. A necropsy will be performed to confirm cause of death.