Obama, an adult female Loggerhead, was released on the 4th of July! 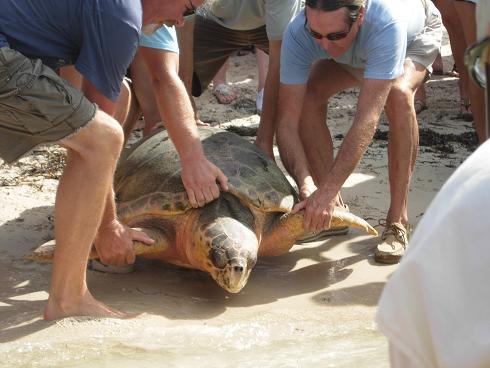 Aptly named by her rescuers, Obama was rescued on January 19th 2009 on the eve of President Obama’s inauguration. Turns out, our Obama was suffering from a severe intestinal impaction. She received some extra squid in her diet that was soaked with vegetable oil, a natural laxative! After 5 months of treatment, she was ready for release, and what better time than during the celebration of our country’s Independence?

Obama was released on the 4th of July from Higgs Beach in Key West, not far from where she was found. Her release was public, and more than 100 people attended to watch her return to her ocean home. With some difficulty (she weighed over 200lbs!), Obama was placed on the sand near the surf. With the ocean in plain sight, she quickly lifted her body, and swam away with all the energy she had. We say goodbye to Obama and we hope she has a long and healthy life.

Click here to watch her release live thanks to our friends at Digital Island Media: http://www.youtube.com/watch?v=9WQz6K5ZaI8

Or click here to read the article from USA Today: http://www.usatoday.com/news/offbeat/2009-07-04-turtle_N.htm