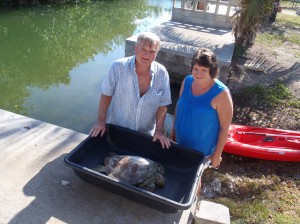 Depicted above is Roger Rusak, and daughter in-law, Lori Rusak once “Dallas” was rescued.

After a busy morning of husbandry, wound care, and blood draws, the sea turtle rescue phone started to ring! On the other line was Roger Rusak reporting a floating turtle in the canal behind his house. He said it looked like the turtle had been floating for a while because of algae growing on its shell and noticed growths on the flippers. Rehabiltation Specialist, Marie Simpson, quickly shifted gears and loaded the turtle ambulance for rescue. After a 45 minute drive Marie arrived to the scene to meet with Roger and his family. His family was Lori Rusak, daughter in-law, and wife, Dallas Rusak. Since the turtle had shifted to the opposite side of the canal, rehabber Marie, kyaked to the other side. Once she paddled over to the little floating green sea turtle it was easily picked up and put on her lap. Right away Marie was able to spot fibropapilloma tumors growing around the flippers. The family was very greatful that the Turtle Hospital was able to rescue the turtle. Upon asking the family what they would like to name the turtle they decided upon Dallas. Roger wanted to name it after his wife. After working up the green at the Hospital it was discovered that Dallas, the turtle, was anemic and had an unknown, abnormal shape in the body on the x-ray. We are still not sure why Dallas floats; however, it may have to do with something in the intestines or an adhesion in the cavity. So far Dallas is on antibiotics and vitamin injections to help her get strong enough for surgery which is required for the removal of the tumors. Keep posted to learn about this turtles recovery! 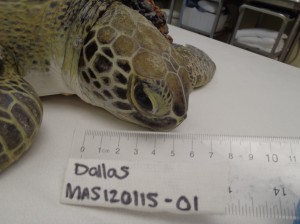