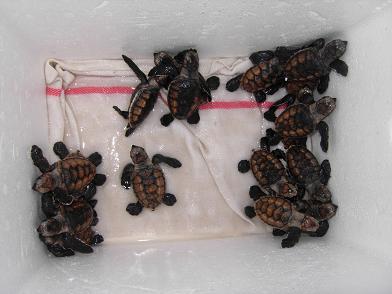 This year Bahia Honda State Park had the pleasure of monitoring the only documented Hawksbill sea turtle nest in the state of Florida! The first documented Hawksbill nest at Bahia Honda occurred in 2000. These turtles, once hunted for their beautiful shells, are a critically endangered species. On August 18th a female Hawksbill chose a small patch of sand behind a mangrove, very close to the parking lot and on the most populated section of beach to nest! The park rangers built a special pathway so that when the nest hatched the babies would be guided towards the ocean and away from the parking lot. 54 days later on a beautiful Sunday afternoon the first of these hatchlings began to emerge! There was much excitement as visitors and park rangers gathered to witness this amazing and unusual day hatchling. Although hatchlings typically emerge at night, occasionally a few will emerge during the day. Over the next couple of days, approximately 70 hatchlings emerged from the nest. A few weak turtles were found at the bottom of the nest and brought to The Turtle Hospital for monitoring. On October 30th, a second nest emerged and 17 more Hawksbill hatchlings were brought in. These baby turtles will stay at the hospital until they are healthy and eating before being released back into the ocean. 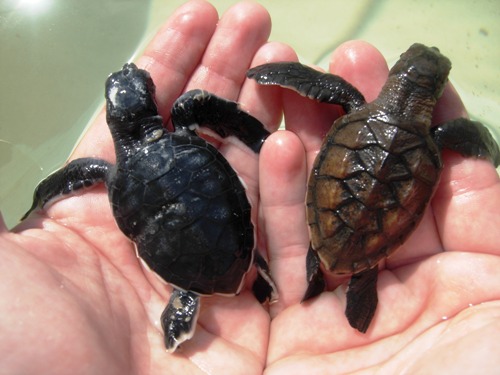 (Pictured above: Green hatchling on the left, Hawksbill on the right)

In addition to the Hawksbill nests, Bahia Honda State Park became the nesting ground for a female Green sea turtle. This was the first documented Green sea turtle nest at Bahia Honda and only the second Green sea turtle nest documented on the main line Florida Keys. During the week of October 12th, the nest hatched and all but two babies emerged and made it to the ocean. These two turtles spent two short weeks at The Turtle Hospital before they were ready to go home! On October 26th, staff released the hatchlings offshore of Marathon into the Sargassum Weedline.